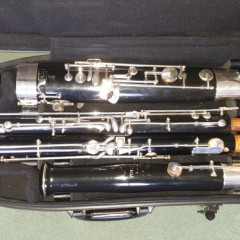 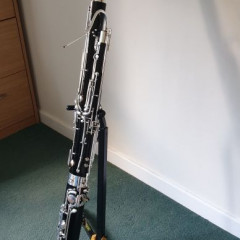 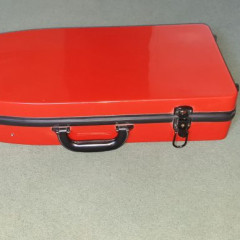 This is a wooden bassoon made to the specifications of William Polisi, former principal bassoonist of the New York Philharmonic. Keywork to high D, plus a number of special rollers and trills that Polis patented. Especially good for those with smaller hands but can be played by all.
Polisi bassoons were made by Kohlert in Germany, but heavily specified and upgraded by William Polisi in the US (a professional bassoonist in the New York Philharmonic) which explains why this bassoon is so unusually good - it was commissioned and co-designed by a leading professional player.
They are also characterised by their warm, dark tone, easy playing qualities and good intonation. The other characteristic is the sophisticated level of keywork many of them were sold with, especially the Concert model, which has some really interesting features.
This was bought from Double Reed 2 years ago where it received a full overhaul in their workshops and carefully adjusted for optimal playing capabilities.
Verkäufer:
Colin Mellish
Email seller
Whilst musicalchairs makes every effort to ensure that the information listed IS accurate, fair AND genuine, we cannot take responsibility if it transpires that an advert has misled.

Keep up to date with the latest Jobs, Courses, Competitions, Instrument Sales and News for Fagott.