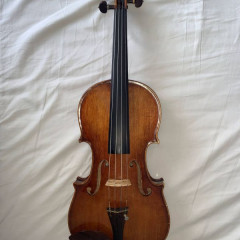 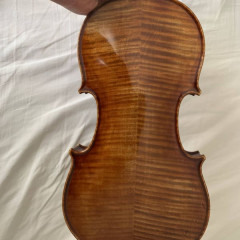 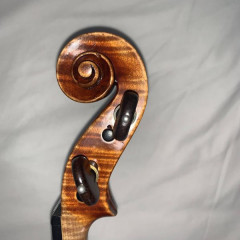 Click images to enlarge
Preis: £2200
This is a 1928 example labelled C. Pierre Gruhier. This is a trade name of the Mirecourt instrument makers in France. These violin makers were producing instruments in the period between 1870 and 1930. Their instruments were targeted at students and young professionals as a cheaper alternative to an Italian instrument.

I purchased this violin in late 2008, early 2009. Since then I have used it during my study years and early professional career. The violin has warm and distinct timbre and looks pleasing to the eye.

In my years of ownership the violin has never been dropped or abused in any way. I have not had any cracks and as far as I can tell the violin has not had cracks previously either. It is in good overall condition and ready to be played.

If you would like further information, images or are interested in trying the instrument in person, please send an email and I will get back to you.

This instrument is located in Glasgow, UK.
Certification: n/a
Verkäufer:
Yoan Hlebarov
Email seller
Whilst musicalchairs makes every effort to ensure that the information listed IS accurate, fair AND genuine, we cannot take responsibility if it transpires that an advert has misled.