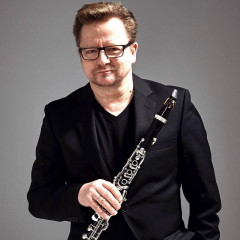 We are pleased to welcome you to the international masterclass with Prof. Wenzel Fuchs.
He began his professional career at the age of 19 as principal clarinetist of the Vienna Volksoper and followed five years later by a similar appointment with the Vienna RSO. Since 1993 he has been the solo clarinetist of the Berlin Philharmonic.
Wenzel Fuchs also teaches at the Berlin Philharmonic Orchestra's Karajan Academy and has held a professorship at the Hochschule für Musik "Hanns Eisler" Berlin, as well as a visiting professorship at Sakuyou Music University in Okayama, Japan, and an honorary professorship at the Shanghai Conservatory. He regularly gives masterclasses all over the world. Since October 2015 he is a professor at the Mozarteum Salzburg.
Our course services included: individual lessons, accompanist, public performances, closing concert, and certificate of participation. There are no auditions before. All participants will be confirmed after the order of their application.
Più informazioni:
Visitare sito web
Email course
Whilst musicalchairs makes every effort to ensure that the information listed IS accurate, fair AND genuine, we cannot take responsibility if it transpires that an advert has misled.

Keep up to date with the latest Jobs, Courses, Competitions, Instrument Sales and News for Clarinetto.