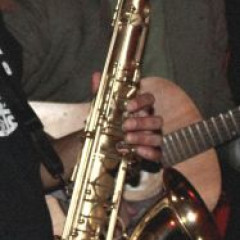 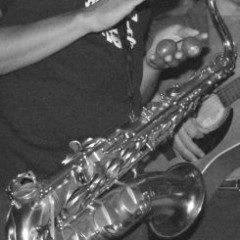 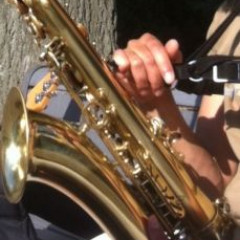 In the bag there was a torn hanky swab, two straps (one that goes around the chest), a box with reeds, a little screw driver and a bunch of coffee filters.
Descripción del instrumento:
It's a brushed Selmer Series III tenor saxophone and it's almost 15 years old. Aesthetically it's not in good shape. It has quite some dust lying around, and some parts suffer from rust and green verdigris (especially the lower F-key). The neck has some rust spots on the lower side. The bell has a few smaller bumps on top where folds out. It sounds great though and is pretty tight, although some pads are a bit worn. The mouthpiece is a hard rubber Meyer that's pretty worn in the sense of a greyish color change outside on the sides and light brownish inside. It has a protector in form of a plastic pad place where the teeth bite. It was in a black and blueish/purple worn soft bag, as old as the horn, of which the zipper broke long time ago, so it has been closed by the use of big rubber bands of the kind you use for bicycles. The bag is shaped as a box, so not one of those that are shaped like the horn.
Owner:
Marc Wilkins
Email owner
Whilst musicalchairs makes every effort to ensure that the information listed IS accurate, fair AND genuine, we cannot take responsibility if it transpires that an advert has misled.

Keep up to date with the latest Jobs, Courses, Competitions, Instrument Sales and News for Viento Madera.