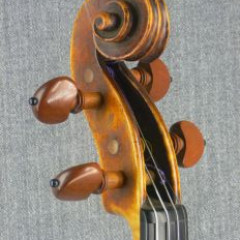 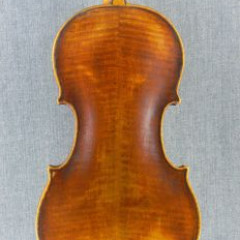 The Goffriller violin and Sartory bow were collected from Beare's in London. The person carrying the case put it on the rack on the 12.18 train from Paddington to Taunton. He got off at Bedwyn then realised that he hadn’t got the violin. The police reassured him that the staff would look after the violin when they checked the train at Taunton. It seems most likely that someone had taken it off the train either at Taunton before the staff arrived or at one of three stations en route after Bedwyn, namely Pewsey, Westbury, Castle Cary. The other possibility is that he was targeted and distracted which means that the Goffriller violin might have been taken off the train earlier at Slough, Reading or any one of the stations on the way west before Bedwyn. Promises that CCTV would be used to help find it were thwarted by failures and mistakes. A reward for £10,000 is on offer. I hope it will be recovered soon and that its beautiful tone can be heard in public again. Ruth
Description de l'instrument:
This is a Matteo Goffriller violin made more than 300 years ago. It has a two-piece back with the wood grain sloping gently almost like a reflection but with the darker parts staggered. The brown varnish has dark areas near the “f” holes and on the scroll with variations as shown in the photographs. The black crescent edge at base of neck is distinctive. When it was stolen the violin had rosewood pegs and tail piece. It was with a bow stamped “E Sartory” and both were in a rectangular case with a dark brown cover that has missing zip tags. The violin was due for attention by experts although it was basically in very good condition. The violin was bought by my late mother during WW2 and has a Goffriller label inside it dated 1698. The certificate was not stolen.
Owner:
Ruth Self
Tel: 01524 770503
Email owner
Whilst musicalchairs makes every effort to ensure that the information listed IS accurate, fair AND genuine, we cannot take responsibility if it transpires that an advert has misled.

Keep up to date with the latest Jobs, Courses, Competitions, Instrument Sales and News for Violon.