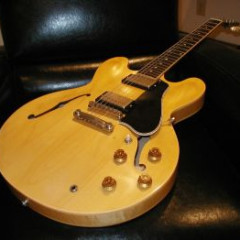 In the Longfellow/temescale neighborhood of Oakland, CA.
Descrizione dello strumento:
This is a beige colored Gibson ES 335, looks just like the one in the picture attached. I kept it in an acoustic guitar case, which was starting to break apart at the bottom… so the original Gibson case will NOT be with the guitar (unless somehow the jackass who stole it is smart enough to find a replacement before pawning it off somehow). I don't think I have any other details on the guitar, as I bought it from an old co-worker years ago and all of the other details were shared via internal work email at a place neither of us work anymore. They also stole my amplifier, which was a LunchBox acoustic model. White with a red-ish speaker.
Owner:
Nick Boots
Tel: 9256839977
Email owner
Whilst musicalchairs makes every effort to ensure that the information listed IS accurate, fair AND genuine, we cannot take responsibility if it transpires that an advert has misled.

Keep up to date with the latest Jobs, Courses, Competitions, Instrument Sales and News for Chitarra.